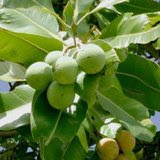 With an aroma that is (in my opinion) not unlike that of a walnut, tamanu oil is perhaps one of the most intriguing oils I’ve ever come across. Apart from the aroma, it has a rich colour and a consistency that is thick, almost puddingy. Despite its richness, it absorbs into the skin remarkably well. So what is tamanu oil?
Well, the Tamanu tree is native to South East Asia and Polynesia and has now naturalised to Hawaii and grows in Madagascar (where it is known as Kamanu). It is also known as Calophyllum inophyllum, Anti tree, Alexandrian laurel, Kamani tree, Indian poon, True kamani and Foraha.
Calophyllum is from the Greek ‘with beautiful leaves’ and is sometimes called Beauty leaf. With its droopinf fruit, glossy leaves and aromatic white flowers, it is often cultivated as an ornamental tree. The oil is obtained from the sun dried nuts that are cold pressed to produce a thick, viscous oil that can vary in colour, from dark green/yellow to almost black.
Before the conversion to Christianity, the ancient Polynesians considered the Tamanu tree assacred. Idols were carved in the wood and they are still considered a sacred relics of the past. Considered highly medicinal, the oil and many parts of the tree were and are still used in tinctures and decoctions.
The oil is sometimes used in conjunction with coconut oil and flower essences as a massage medium for Lomi Lomi massage. One of the properties of tamanu is that it is rubefacient, increases blood circulation, so it’s one that would be good in any warming oil massage blend. The fruit extract has been used to make a brown dye to colour tapa cloth and the oil used to waterproof it.
It is interesting to note that around the turn of the century (1900), missionaries in the South Seas noticed that people suffering from leprosy would come to the leper house with Tamanu, which they rubbed on their wounds. They had the idea to dilute the oil in an alcohol ether to prepare an injection. This proved effective against the associated neural problems and is still used successfully in hospitals in this region.
Tamanu Oil is said to…
· Be useful in treating rheumatism
· Relieve itching· Relieving scabies
· Have similar properties to Myrhh
· Help relieve ringworm
· Be used as a liniment for joint pain
· Be used by Fijan mothers to help prevent nappy rash
· Be good to use in place of lip balm for chapped, dry lips
· Healing to wounds, cracks and chaps
· Good to apply to chemical and physical burns (including sunburn)
· Be anti-inflammatory
· Be useful for allergic skin disorders such as eczema, dermatitis and psoriasis
· Be useful for general skin disorders such as diabetic sores, chilblains, cracks, acne, dry skin
· Be useful for skin diseases such as herpes
· Treat alopecia
· Relieve haemorrhoids
· Reduce the appearance of scarring and keloid scarring
Cosmetic Uses:
While tamanu oil has been a long kept beauty secret of the natives, it now has caught the interest of some cosmetic scientist and a number of studies have been carried out with interesting results. Tamanu is a valuable raw ingredient in cosmetic preparations and is used chiefly for its restorative, regenerative and protective properties. It can also be used in soap making as a valuable and active ingredient. Examples of other uses include…
· Used neat or infused with essential oils / fragrance oils (flower fragrances are ideal)
· Ideal for acne preparations
· Added to ointments for aches & pains of the joints, muscles and nerves
· Restorative and protective cream formulations
· To add 'value' to soaps
· Used in massage, blended with other carriers (largely due to the expense)
· Lip balms for chapped, parched lips
· Body butters and bars
More about tamanu oil....