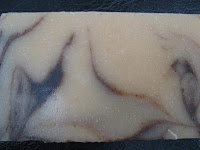 After a pretty good success from my M&P experience, I was all fired up that evening in preparation for my CP experience. I had asked for some last minute advice/tips on the forum that night then set about looking for soap recipe. I eventually found one which was both too large and needed converting to metric.

So I halved the quantity and converted the measurements so, as I thought, I was all good to go the next morning. I must admit, I asked for the advice rather late the night before and got on task early the next morning so, as far as I was aware, no last minute tips to help get me on my way.

So, here is the recipe (the cinnamon swirl and the colouring was something I added in myself, as are the essential oils used + there was a bit of exchanging one ingredient for another)…

The bit I added…

1st essential oil blend – 5 ml tangerine, 1ml mandarin, 2ml grapefruit, 1ml lemon
2nd essential oil blend – 2ml nutmeg, 3ml cedarwood
2 teaspoons ground cinnamon
Red wax crayon, black wax crayonI pulled up the tutorial that the Fee Fairy kindly put together on my computer screen so that I could keep making reference to it should I need to (it was my comforter)

With all the oils in a stainless steel bowl and a saucepan of hot water ready to go, I left these to one side while I set about preparing the lye, the bit I was dreading
I took the scales outside and got an old pot to weight the lye into(I also covered the scales surface in case any granules spilled over). My water I had prepared much earlier with boiled spring water and two tea bags, let it brew then set the bowl outside to cool (I did have to pop it in the fridge for a little while)

With the water at about room temperature and the lye weighed and ready (ooh, and me wearing thick rubber gloves and a mask – I looked gorgeous), I added the lye carefully to the water, keeping my face slightly turned away. I stirred carefully and before long, the steam began to rise in the cool morning air. Do you know, I didn’t get one whiff of the fumes at all!
When satisfied the lye was fully dissolved, I took the spoon used to mix it and ran it under the hose outside and left it outside for the time being. I then went inside to begin heating the oils (leaving the lye to cool outside)

When the oils had melted I fetched the lye in ready to add to the oils. I had intended to get them bnoth at around 65 degrees C but the oils were something like 75 degrees and the lye had cooled so much it was at about 55 degrees. I was tempted to cool the oils (in a bowl of cold water) but this would take time and the lye was cooling all the time. I wasn’t sure whether it mattered how cool the lye got or whether it could be heated again, I just went ahead and added the lye to the oils and got the stick blender in there.

I did intermittent power on, power off but after about five minutes, it started to look quite thick and did leave a ‘trace’. But I had heard about a false trace so I then went on to hand mix for the rest of the mixing period rather than blend with the stick blender. I was right, there was a clear trace. I did however add the essential oils at this point.

When it reached trace, I realized that I wanted to do the swirl but the mixture was far too cool to melt the crayons (yes I said crayons, I heard that these can be used and since I had no other colour pigments, they would have to do). So poured most of the mixture into the mould (which, and I know now that I made mistake here, was unlined – it was a non-stick teflon coated loaf tin I bought the day before – its all I could find the day before and would have preferred a SS one so sorry).

I saved some mixture back and quickly got another pot to melt the crayons in on the double boiler. They melted quickly (phew) but went all cloggy when added into the mixture I had saved back. I had no choice but to reheat the whole lot, soap and globby crayon bits. However, this was successful. I took it off the heat, added about 2 teaspoons of ground cinnamon and stirred for a while to cool a little before adding the second essential oil blend.
I then dropped small amounts of this coloured mixture over the main soap mixture then used a small spoon to carefully swirl.

I covered this in cling film and wrapped it in a snug blanket (an old cot blanket – bless) and it has now been sitting there for well over 24 hours. I can’t help myself, but I do keep having a peek at it. I just can’t wait to demould it and slice it to see what it looks like.
Well, I am unable to report any further on this at the moment as it is still in the mould but just as soon as its out, I’ll report back!

After a couple of days, I sought some advice on the forum as to when it would be ok to demould and cut the soap. From my description, it was suggested that it was probably ready (yipee!). I was advised to pop it into the freezer and, if necessary, blast the hairdryer over the bottom of the mould. Turns out, 10 minutes of freezing and presto, out it came.
{mosimage}However, the surface of the soap loaf was covered in bubbles (I wonder what caused that and I wonder if it could be prevented?). So I set about cutting it (I was cautious of the raw soap, in case it would burn so I picked up a small piece, rubbed it in to a small area of skin and waited to see what happened - fortunately nothing happened).

To cut the soap I started with a smooth edged knife but wasn't brave enough to go bull at a gate at it and was maybe too cautious as I ended up shaving of a small, thin slice that rolled up like those decorative chocolate swirls - Fantastic I thought, so shaved off a whole load of others. This also gave me some confidence to just cut into it.

I cut it into slices and tidied the edges. They are now sitting on a rack curing (on paper as advised by one of the forum members as this is a metal rack).
I had a lot of odds and ends left so decided I was going make these into a soap ball (for the kids). As the soap was still very soft, I chopped it into really smally pieces, wet my hands and began moulding it all into a ball. The result really looks funny. It looks like a baked spud!

The most wonderful part of all this was when I can to wash all the soap from my hands, it created the richest lather (believe me, I would have been happy with just a couple of bubbles). Little old me had created bubbles and from scratch! I could hardly believe my eyes!! It was such a proud moment =o)
Posted by Helen at 21:56

I missed this soap on the forum somehow. I love it. You should make more.

I did it as a 2 part report on the main site linked from the forum so you could well have missed it. It was also a year ago, lol. Thank you so much for your kind comment. It is not much to look at but it made the most lovely lather :o)
xx

Your lye method is slightly different from mine. I tend to put the lye into the water, give it a quick stir, then run away to breathe. I hold my breath while I stir it, then run away again. Mind you, I have had a couple of whiffs of lye - something to avoid!

Good luck with staying this prolific. It's a good job you have so much free time...

Thanks also for the alternative method of mixing the lye, he he...

Funny, this was the first soap I ever made and at that time (a year ago) I had no idea what a soapcalc was or what the heck it was for. I was told on the forum that the superfat was very high (I think it was) but you know, it made a really lovely and very hard bar of soap. The lather lovely, rich a creamy. I still have a thin bar left (from the end of the log) with no DOS or anything. Doesn't smell of much now though, lol.